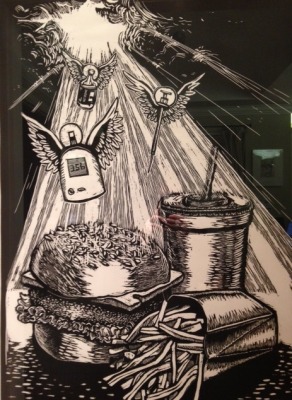 I’m an A+ house sitter and while overseeing a friend’s home over a series of weekends, I grew fond of a particular print in her hallway. One day while strolling down the hall I stopped dead in my tracks – that angelic figure is a monitor with a test strip and a reading of 356!!!!! 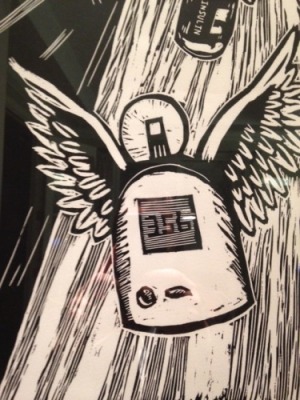 After further investigation, I noticed the needles and bottles of insulin. This piece is about diabetes! I had to know more so I reached out to the artist, Marwin Begaye, an internationally exhibited printmaker, painter and nationally recognized graphic designer. His research has been concentrated on issues of cultural identity, especially the intersection of traditional American Indian culture and pop culture. Diabetes is on the rise in the Native American community and I think this piece speaks volumes to the problem. 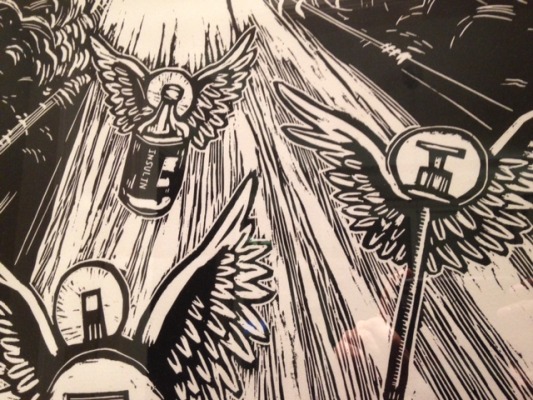 This body of work is intended to bring awareness about the epidemic of Diabetes in our community.  I hope that viewers will see how their own actions are complicit in this disease.  As an artist, I’ve used a variety of media in this show that communicate this message on many levels.  Each of us has responsibility to make healthy choices.  We often choose affordability and convenience over our health.

The woodblocks seemed to be the right medium for exploring the impact on our community.  The graphic quality of the woodblock and the black ink has an old school look for the contemporary message.  The starkness minimizes the distracting nature of color and allows the message to be clear.  These are the black and white reflections of the impact of our poor tobacco, food and drink choices. We make these choices daily and rarely do we evaluate the choice on its effect.  But the choices have an effect… one that is deadly.

The digital posters are the right medium to exploit the colorful and bold nature of advertising.  When developing these images, I wanted to match the visual quality of the advertising with which we are bombarded.  I want the viewer to recognize it and then to notice that it is no longer the same message.  This kind of work is called “Culture Jamming,” where the icons of our American culture are turned on themselves.  Not only do these images create a counter foil to the original, but also they empower the viewer to become aware of the message of those original marketing messages.  We can’t really believe that these corporations care about us or are thinking of us. Our American culture is addicted to their products.  How many of us can go a day without a soda or a week without eating out?

As Indian people, we’re quite good at making our world beautiful.  But this disease isn’t pretty and we don’t seem to be reacting to its ugliness.  We’ve sugar-coated the issue so we can continue to eat and drink products that are heavily processed and sugar-laden.  These things are killing us, and our future generations. I just want to expose that… to expose the truth.

Not only do I love this piece, I applaud Marwin’s efforts on using his medium to express concerns of the Type 2 epidemic in the Native American community.