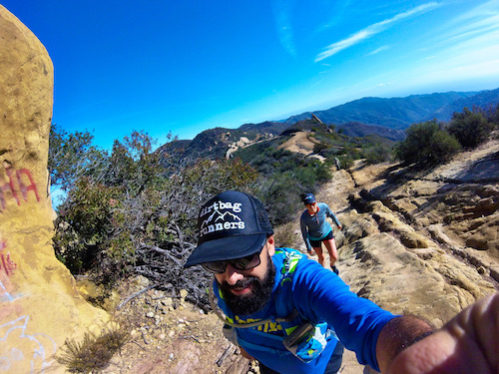 Type 1 diabetes is one of the few diseases that needs to be micromanaged on a daily basis, 24 hours, 7 days a week. There is no holiday, time away, or opportunity to hand over control to someone else for a while.

When you have a personality like mine, this means becoming almost obsessed with the daily management tasks of living with type 1 diabetes. This has many benefits, no doubt: great control, predictable BGLs, and a HbA1c below 6%.

Yet, the thing I struggle with most as a person with type 1 diabetes (I don’t think I am alone here), is trying to find that balance between good control and letting go when things don’t go to plan.

Most recently I was on a short vacation in California. Before I boarded the plane from Sydney I vowed to myself that I would keep my blood glucose levels below 180 mg/dL (10 mmol/L). I had plenty of experience traveling since being diagnosed and thought this was achievable. Well, in summary, things didn’t go to plan.

There were so many variables on my trip which I allowed to happen, yet knew they would cause fluctuations in my BGLs.
My food was not consistent (eating more fat in my vegan diet, than usual. I didn’t have a daily routine. I wasn’t exercising as frequently. I was spending more time doing random tourist activities and eating out at restaurants. All of this was extremely fun, apart from when I looked at my CGM data. My BGLs frequently hit around 300 mg/dL (16 mmol/L) and many times they dropped below 65 (3.6 mmol/L), all in one day.

I was beyond frustrated at the erratic changes in my BGLs and their unpredictability, until I had an experience on a long trail run in the Californian Mountains, on New Year’s Day.

Starting what we anticipated to be a 3-hour run with my friend Alex with a BGL of 180 mg/dL (10 mmol/L), I ate half a banana and gave a microbolus of 0.5 units of Novorapid through my insulin pump. Before we had even hit the 20-minute mark my BGLs decided to crash with a reading of 140 mg/dL (7.7 mmol/L) and triple arrows down – anyone without an insulin pump, this indicates your BGLs are dropping rapidly.

Trying not to panic or ruin our run, which had barely begun, I ate some of the snacks we brought with us – a gel and a Clif bar, approximately 60g of carbs. My pump was on suspend and I was now feeling good, so we kept going… and my BGLs kept dropping.

I continued to eat more snacks over the next hour, and my BGL was hovering around 60-65 mg/dL (3.2-3.6 mmol/L).
Not ideal but the numbers were stabilizing.

I was relying on my CGM to monitor my BGLs on my run, as I had left my glucose monitor in the car. As we hit the 1.5-hour mark, we had officially run out of snacks or hypo treats, and my CGM was telling me my BGL was still around 65 mg/dL (3.6 mmol/L). At this stage I was so frustrated with myself that our run had to be cut short because I hadn’t come fully prepared. I didn’t bring enough snacks to clearly treat a severe hypo and I also didn’t bring my glucose monitor with me to clarify if my CGM reading was accurate.

Without phone reception but with a very patient friend, we hitchhiked back down the mountain to the car. I immediately tested my BGLs, feeling quite unwell at this stage and the meter read ‘HI’ – meaning a BGL over 600 mg/dL (33.3 mmol/L)!!! I hadn’t had a reading this high in over 5 years. I was in disbelief and so angry at my lack of preparedness. Angry and frustrated at myself, at my diabetes, at my poor planning, at my blasé approach.

This incident was perfectly timed on the first day of 2017, giving me the opportunity to reflect on how I currently manage my diabetes – the pros, cons and what I can learn for an even better year.

What I took away from this trip was the need to be okay with making plans that don’t always prioritize my diabetes. This does not mean making the same mistakes I did when I headed out for the trail run in the Californian mountains. This was an example where I should have taken an extra 10 minutes in making sure I had everything I needed to make the run successful and enjoyable.

My resolution does mean the following:

All this said, bring on a year full of fun, challenges and great diabetes management… with a sprinkle of balance in there for good measure!

One thought on “The Balancing Act (Is It Ever Okay To Sacrifice Control?)”