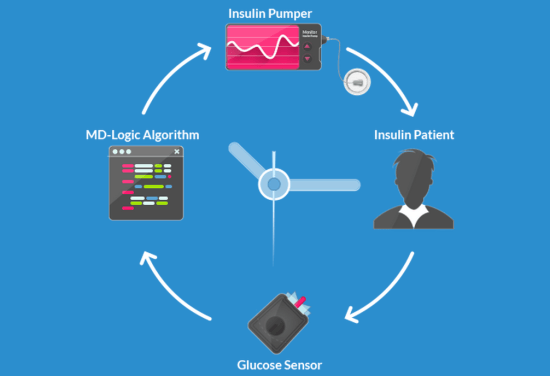 A diabetes development hits the news every five minutes. Our job at the DDG, is to showcase to you which of these really matter. We think this DreaMed and Medtronic partnership matters. Why? We’ll get there, but first, let’s define the agreement.

DreaMed Diabetes’s CE approved GlucoSitter™, which is based on the MD-Logic Artificial Pancreas algorithm, is a fully-automated, artificial-pancreas system for controlling glucose levels. The system links the glucose sensor with the insulin pump through computerized control algorithms. It uses data of glucose levels from a continuous glucose sensor, analyzes them and directs the insulin pump to deliver the correct dose of insulin that should be released to the body in order to maintain balanced blood glucose. In effect, the software continuously monitors glucose levels, and defines precisely when and how to adjust insulin levels.

1) This means that a closed-loop system is not only imminent, but that Medtronic thinks it’s coming, soon, and that they might get beat to the punch. Now the race is on.

This also means it’s feasible. Medtronic is huge. This isn’t a small research team putting together a project. They see promise in DreaMed’s technology, and they feel that they can ride it to market.

2) This is hard stuff to create.

Medtronic found it though, in DreaMed, and is willing to dish out royalty fees. This algorithm is incredibly difficult to create. You basically have to recreate a perfect interplay between insulin, glucagon, cortisol, and epinephrine. Speaking of glucagon, the struggles associated with getting it into a pump are described at SweetLife.

If this is meant to be a closed-loop system, which it is, I know my current Enlite CGM isn’t going to be accurate enough to be trusted. Not yet. It’s very close. Not perfect though. Hopefully, this insinuates that Medtronic has a more accurate sensor technology coming in future years.

For a complete look at the state of the artificial pancreas, I thought this article published by Glu did a solid job.

=DDG Book Of The Month=

5 thoughts on “Let’s Geek Out: 3 Reasons You Should Care About The DreaMed and Medtronic Partnership”