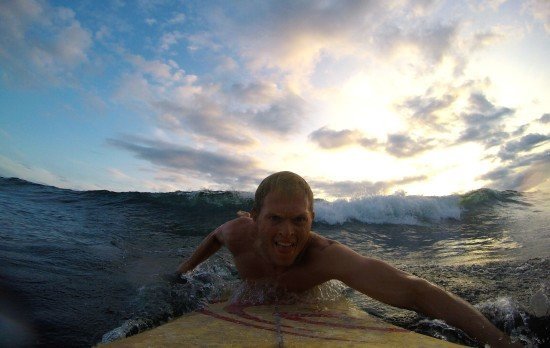 (Ryan is not currently scanning the coast but the pathophysiology of asthma. Authored July 2015.)

Let it be known: I am not a real surfer, yet. Can I swim? Aptly enough. Can I catch a wave? Yes. Can I stand up? Occasionally. Can I turn? Sure.

That said, as I scan a nice break off the coast of Maui, humbled is my main qualification. Surfing is an art honed through decades of work in salty water, watching the sun rise and descend on opposite horizons, all on the same day. I have observed real surfers. Those who are the art and the religion–no separation between their body and the waves, riding the earth’s energy. Gorgeous stuff.

Having paddled out now over 30 times, blood sugar themes do their emerging thing, and I know what to expect. In many ways, I’ve found surfing to be a simpler, more-straightforward cause and effect relationship between movement and glucose levels (compared to running or cycling).

It’s basically an exercise in swimming, lots of swimming, but with breaks. Rarely, do I paddle for more than a couple of minutes straight. I paddle out, totaling 5-10 minutes, wait a couple of minutes (or seconds) for that right wave, surf it, paddle back out, then repeat the process over hours. When paddling, it can be an intense muscle fatigue, heart rate through the roof experience. Getting caught in the middle of a set, tossed down below wave after wave, smacked in the face by a couple of wave crests, all while being pulled back to shore, counts as some of the most difficult, dig deep kinda exercise I’ve done.

The pump used to go out in the water with me, until this quick Twitter convo with Team Medtronic:

@DiabetesGrind While typically they’re fine in the case of an accidental splash or dunk, we don’t recommend submerging them in water.

Fair enough. Besides, even with a temp basal, I trend low after just 30 to 60 minutes in the water. Time for the daring adjustment: the disconnect. Now stored in the car, the pump is no longer attached to my body, even for long periods. Whole papaya in the system, after a 154 reading, half a unit of Novolog on board, nerves charged with a Kona blend, today I embarked on a two hour pursuit in the surf, reemerging with a reading of 141.

A little crazy right? That long without insulin? With fruit on board? Well, that’s been the theme and it’s just about the most consistent exercise regimen I’ve discovered. Fruit. Coffee. Little bit of insulin. Ditch the pump. Surf. Eat more stuff. Sleep.

Here’s a look at another day in the water, blood sugar levels, and documentation that I did indeed “stand up”: