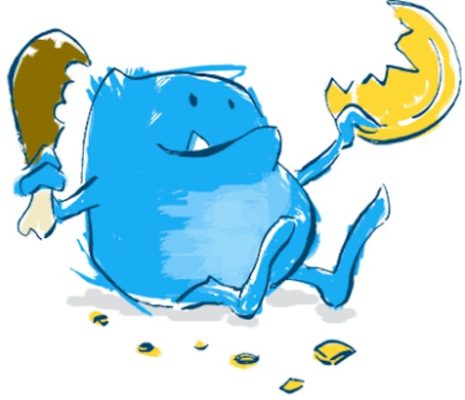 I penned this gory article because I can guarantee that we’ve all transformed into otherworldly creatures at some point in our diabetes lives. Many are embarrassed about the other faces our ‘invisible disease’ has. Why should we be ashamed? Let them roam free!

Have you ever hooked your pump tubing on a door handle and sprayed blood everywhere like a vampire? Have you groaned and dragged your legs across the room like a zombie and almost eaten the closest person’s arm in desperation to find a hypo fix? Perhaps you’ve literally turned into Jabba the Hutt from Star Wars, blobbed on the kitchen floor, sweating and shoveling unspeakable combinations of food into your mouth, dribbling down your chin at the same time.

If you’d prefer to keep your air of dignity and insist that you act with complete decorum at all times, consuming Jelly Tots with a silver knife and fork, and only drink juice from Royal Albert teacups, that’s fine. I shall take your burden upon my shoulders and admit that I have indeed been all these creatures, and plenty more.

We, as a beautiful collective, are frequently referred to as ‘the sweetest things’, even brandishing t-shirts with slogans such as ‘Sugar’? Nah, I’m sweet enough already, no t-shirt necessary. Yes, we have an angelic side too, but you know this isn’t always the case. Some of us treat our other ‘faces’ like a dirty little secret, unleashed only behind closed doors. It can be touch-and-go at times when our true identities (this sounds like we’re part of the secret service!) are revealed in public, but why should we go into witness protection? Every single person across the world runs the risk of being humiliated in some way, every day, but we own the most brilliant stories.

Would you rather be remembered as that guy who tripped in the office and tipped coffee down himself, or the woman who held the record for eating the most dextrose tablets in one sitting? I know who I admire! So cast your worries aside, embrace these ‘faces’ of diabetes and own them, being the best zombie, vampire or other creature that you conjure.

As a final side note, monsters are currently quite popular on television, you could be talent scouted on the streets and become a celebrity, fancy that! (A proportion of your future wealth should be given to me as a thank you for this piece of uplifting advice).

Carrie Hetherington was diagnosed with type 1 diabetes at the age of 19. She lives in New Zealand, though is currently teaching overseas in the United Kingdom. Her role in the diabetes community has grown from sitting on the Diabetes Youth New Zealand committee to representing the country in both Australia and Canada as an International Diabetes Federation leader. Carrie has written articles for several countries and an international magazine. She is also a freelance author having penned a children’s book, ‘Little Lisette the Diabetic Deep Sea Diver’, with a second and additional adults novel on the way. She has a BA in History, Political Science and International Relations, a GradDip in Secondary teaching and a Masters in Development Studies, which focused upon diabetes in developing countries.

4 thoughts on “Owning Our Inner Monster, Vampire, or Other Creature”