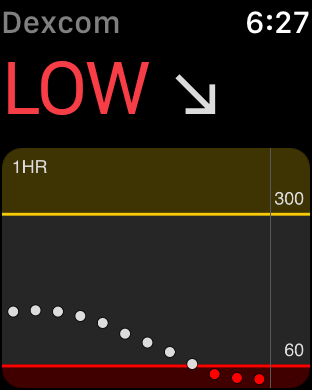 With crossed fingers and pump tubing, I hoped for a one week placement on Endocrinology during our six week Pediatrics rotation. All that crossed tubing paid off–granting a chance to be around my people for a week. During a four year education, opportunities for type 1 diabetes exposure are slim, surprisingly.

It felt good to be back in the peds endo office after a 10 year hiatus, although a tad disorienting. Lies about logbooks were absent (all numbers are now downloaded straight from the meter), parents know even more than they used to (thanks to Dexcom share and all those other meter apps), and 504 plans are a mainstay (my plan used to involve proving to my high school teachers that I was low with my meter and stumbling to the vending machine).

Every conversation, I learned something new, really. Diabetes technology moves fast, especially right now. Plus, having diabetes for 18 years has a way of installing bad habits. In a way, I went back to diabetes 101, coming out humbled.

The one week flashback delivered the following subjects to relearn:

After counting carbs and taking insulin, do not correct (or test) until the next meal

First hearing this, I thought, “Hmm, this must be advice for new onset kids.” Then I heard it again. Then I thought about how often I go low right before lunch. Then it made sense. Short-acting (Novolog and Humalog) insulin acts over 3 hours. If you correct a blood sugar of 200 one hour after eating and taking insulin, you now have stacked insulin. This stacked insulin overcompensates for the original amount of carbs. Plus, you never know how accurate your dosage of insulin is if you never see what your blood sugar is after 3 hours of untouched management.

Check out the picture above to see what happens when you stack insulin.

Deep down, most of us know this. We carry bacteria on our shirts and pants, unless your dry cleaner runs a sterile operation. This was reiterated to patients time and time again. Once, it was reiterated to me, caught red-handed.

Once opened, there’s no reason to keep insulin refrigerated

The life of a single bottle of insulin is unchanged (1 month), whether it is kept in the fridge or on the table. Most insulin companies are now recommending to keep it at room temperature, once opened.

And, when it’s refrigerated it burns more. And, when it’s in the refrigerator and not my kit, I’m more likely to forget to take any given shot. And, your vial or pen isn’t going to shatter as it rolls out of the fridge.

Insulin gets fried once it warms to 82 degrees

This would be the exception to the previous concept. Leaving it in the car is a common cause of repeat trips to the pharmacy, believe me.

So, for you people who enjoy giving your test strips a chance to sunbath or get out for awhile, lock them up.

Usually, an endo clinic will have snacks available for lows

This I forgot about, until I went low on the last day of clinic, where most of the in-house staff pointed to “lows” cabinet.

On average, each family receives 5-8 hours of education from a certified diabetes educator. If one day isn’t enough, the CDE will return the next day.