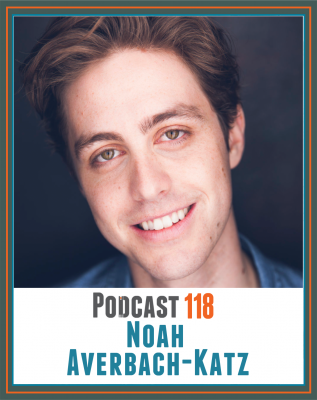 Noah Averbach-Katz blew the doors off a recent Kickstarter campaign for a film that just began production. I believe his experience with live theater AND as a professional actor gave him the upper hand on creating TYPE 1, a short film chosen as one of Kickstarter “projects we love” after it was fully funded in under 8 hours. Stay tuned for more information on the release date and screening opportunities.

The Real Life Diabetes Podcast has worked with a ton of brands who make life with diabetes a more pleasant one. If you would like to learn more about advertising opportunities or sponsorships, please contact Penelope, [email protected](dot)com.

Noah Averbach-Katz is an actor best known for his role as the Andorian “Ryn” on STAR TREK: DISCOVERY and as the Dungeon Master of #DiscoDoesDnD, a Dungeons and Dragons live stream group comprised of his fellow Trek actors. He is a graduate of The Juilliard school, and has appeared in TV and Film projects such as THE GOOD FIGHT, A BREAD FACTORY PT.1, and RELEASE, and has been seen Off-Broadway and in numerous plays regionally.

Noah has lived with Type 1 diabetes for almost 20 years. He raised over $15,000 for T1International’s Vials of Live initiative, and his short film, TYPE 1 was chosen as one of Kickstarter “projects we love” after it was fully funded in under 8 hours.