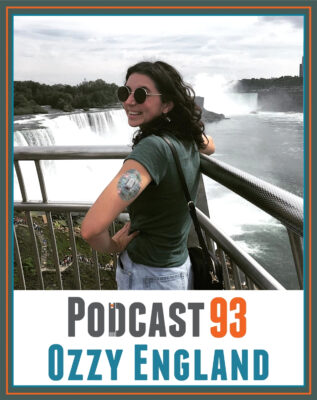 Can you imagine being diagnosed with T1D and five years later stating you’re in the best health of your life? In this episode, we’ll be learning more about my new friend from the land down unda’, Astra-Lia ‘Ozzy’ England.  Several years ago, Ozzy would receive news from the doctor that would shake her world; a T1D diagnosis. In a matter of weeks, she went from living a relatively normal life (albeit with Celiac disease) to being put on insulin therapy. Her fiery personality and unapologetic curiosity about life with diabetes made her the perfect guest.

Ozzy (Astral-Lia England) is a wonderful and dynamic person, currently residing in Melbourne, Australia. She had just finished studying her degree in acting when she became very ill after drinking champagne at a wedding. For the next several months she experienced symptoms that prompted her to go to a GP for what she thought was a urinary tract infection. After some tests, she was diagnosed with Type 1 diabetes and began insulin therapy. The news was startling, to say the least, and came as a shock because while Ozzy already had to deal with Celiac disease, she had no genetic history of T1D and lived a  relatively healthy lifestyle. Ozzy, being the incredible woman she is, she learned the ins and outs of dealing with her disease. Today she is on a mission to raise awareness on the impact that diabetes has in Australia and raise money for further study with Diabetes Australia. Ozzy is now an actress and will soon be featured on TV- “Adventure All-Stars.” She also has a side hustle, Ozzy T1D Mozzy, selling fun merch for those with diabetes with 10% of funds going into research.