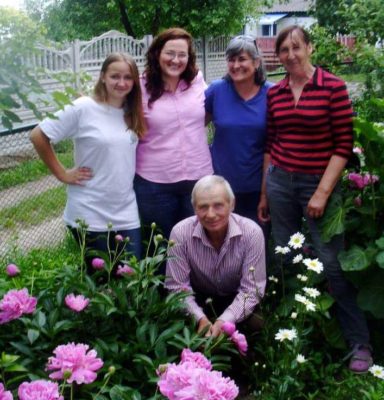 I arrived in Ukraine with my life packed into two suitcases (one of which was half filled with medical supplies). My first stop as a Peace Corps trainee was an old sanitarium just outside the capital city of Kyiv. There, my group of volunteers had a few buffer days in which Peace Corps became real: we learned which language we would study, where our 10-week language and job training would take place, which other volunteers would be in our 4-5 person training ‘cluster’, and we filled out a lot of paperwork. This is also where I had to decide how and to whom I would tell about my diabetes.

Telling someone you’ve just met and know only professionally that you have diabetes is a crapshoot. The reactions vary from, “IDGAF,” to, “My friend’s brother’s girlfriend’s cousin died from that.” There are almost always questions about how you got it or how you treat it or whether or not you can eat that thing or how soon you’re going to die because of it. I had a lot of experience dealing with these scenarios, but I didn’t have experience doing it in another country with another diabetes culture… And in a language I had only very recently learned the basics of (think, “Help!” and “Where is the toilet?”).

Regardless of what I decided to say or not say, I knew I needed to at least know how to say it. So on my second day in Ukraine, I ambled up to one of the phenomenal Ukrainian training staff and had her help me write down a few words on the back of my one-page Ukrainian cheat sheet. While many of them were cognates (diabetes, insulin), some were entirely different (medicine, pump). I felt a little childish having them written down on paper in both Cyrillic, the script of the Ukrainian alphabet, and phonetically in English (for when I inevitably could not compute Cyrillic). Once it was done, it allowed me to focus my anxiety on other things. When I was ready to tell people, I could. I had it written down there, on paper.

I have never been more overwhelmed than I was the day I met my host family. I learned I would be part of a cluster training in a town that had never hosted volunteers before. My family didn’t speak English. There is an amount of implied pressure to be great when you’re ‘the first’ at something, and I felt that more having type one. This was going to be my family, and I didn’t want to scare them with my disease. So after I muddled through my three days-worth of Ukrainian and we more or less silently made our way through my training village, the anxiety built. As we entered our home, my host father made a lot of gestures and I nodded and smiled. My bags were placed in my room, and with my new mom, dad, grandma, and sister, I sat around a table laden with more food than I could ever imagine eating. We all just looked at each other, trying to figure out how to communicate. I cried at that table, trying to tell them about my family in America and searching for something I could say from my cheat sheet that wasn’t, “I need a shower,” but also wasn’t, “I have diabetes.”

We made it through that first night thanks in large part to charades and willpower. I was given a tour of our home, I bathed and unpacked. I put my pump supplies in a drawer and brought my insulin to the kitchen, where I told my host mom I needed to keep it in the refrigerator. I explained in very basic Ukrainian what it was, and bless her: she didn’t say a thing.

I owe a lot of my “success” as a volunteer to Peace Corps for their fantastic training program, but without my host family, I certainly would not have made it. Later in my service on a visit back home, my language skills improved and our bond solidified, I asked my family what they thought of me when I first arrived: their American daughter. They told me they loved me, but they thought they would kill me, ha! And could you believe it?! There I still was, alive and well!

I’ve learned over time that the response I get when people learn I have diabetes has a lot to do with how I deliver the information. It was the same in Ukraine. It is a fact of my life. I deal with it, they deal with it, we move on. There is always something else to worry more about, and that was never truer than in Ukraine when everything else was new. Diabetes became a known comfort. I carry that lesson with me each time I try something new (with some snacks…just in case).

Monica served as a TEFL Volunteer in Peace Corps Ukraine from 2008-2010. The views expressed here are her own, and do not reflect those of Peace Corps. She spent almost five years working for the FDA in Washington, DC, before returning to Oklahoma City to pursue a career in nursing and community health.

2 thoughts on “Pt. 2, Thriving As A T1D Peace Corps Volunteer: How to Say ‘Insulin Pump’ in Ukrainian”