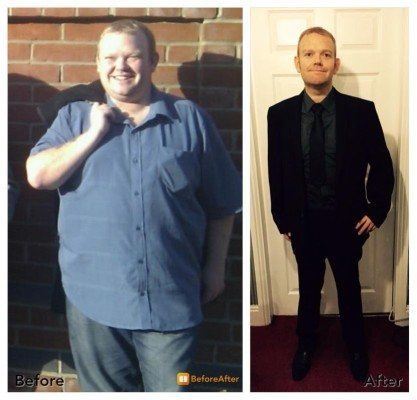 I was obese, ill, tired, suffering from major depression and diagnosed with Type 2 diabetes. My blood sugar was out of control… no wonder I was feeling so unwell!

Back in September of 2014 I was diagnosed with Type 2 diabetes. I had been feeling poorly for quite some time, was overweight and out of shape. At 35 years old and 5′ 8″, I weighed in at almost 20 stone (280 lbs.). I drank a lot of alcohol and smoked roughly 20 cigarettes a day. The alcohol was a big problem and it had been for years. This was more than likely contributing to my depression, but I didn’t want to admit it. The alcohol helped me block out the negative thoughts – and this is the “vicious circle“.

I was on medication for blood pressure, anxiety, depression, heart palpitations, cholesterol and acid reflux. My blood sugar levels were reading 83 after the doctor sent me for a blood test and I was prescribed Gliclazide 80mg. The doctor refused to prescribe  Metformin as my liver wasn’t functioning properly.

I was in denial about all of my health problems! I carried on drinking and eating stuff that wasn’t doing me any good, going so far as to eat large amounts of food late at night after drinking copious amounts of alcohol. Christmas passed and before I knew it, February was here and I was feeling worse than ever. I would often experience shortness of breath (at rest), and chest pains were a daily encounter which triggered the awful anxiety  I suffered from, again, on a daily basis.

One morning I woke up and decided – enough was enough. I really don’t know why I woke up with this mindset; it wasn’t because of a bad dream or had been setting dates. It was time to change my whole lifestyle in a big way because I wanted to live!

I threw away my cigarettes, poured the drink down the sink and put myself on a low carb diet. I was determined to be on a very strict low carb diet for two months to take control of my blood sugar levels. I’ll admit, my low carb diet plan had been carefully constructed, but was quite bland and simple, however, it worked! I decided the best way to start eating healthily was to imagine sugar as a poison. I cut out sugar and read food labels on absolutely everything. In simple terms – sugar was terrible, saturated fat and carbs were not good for me.

Success! I went for a follow up in May and my sugars had dropped significantly! I was taken off Gliclazide and managed to take myself off my medication for cholesterol, depression, anxiety and acid reflux. My cholesterol was reading as normal and my liver had completely repaired itself. As a result of my liver functioning normally, my doctor prescribed Metformin and I was weighing in at 16 stone (224 lbs.).

I was so proud of myself, but I now wanted to go further. I decided to start varying my diet more by introducing fewer carbs. I was determined to get physically fit so I began walking about four miles every day at a brisk pace. After a month, I purchased a decent bike allowing me to turn things up a notch and cycled about nine miles a day.

I’m currently weighing in at 12 stone (168 lbs.) and feel fit and healthy for the first time in my life! Being diagnosed with T2D was the best thing to help turn my life around.

My family has been incredibly supportive and are all making healthier lifestyle choices. My change in attitude and daily habits even has my two children clued up on diabetes and nutrition.

I’m in the process of facilitating groups for Diabetes UK “Type 2 Together” and am really excited about it. I want to educate others about how to turn their lives around like I have. I’ve become stronger throughout my journey living with diabetes and I really do believe I can make a difference now.

One thought on “The Best Thing That Ever Happened To Me: A Type 2 Diabetes Diagnosis”