I am no hero–nor am I trying save the free animal world–but just a guy trying something out, just to be a little healthier, just to feel a little better. That’s always been my mantra when it comes to going plant-based (vegan). Right now, a day’s meals consisting of purely kale smoothies and kale chips works for me. Just kidding, I like to treat myself with cacao dusted goji berries when I really need a splurge.

Okay, in all seriousness and devoid of another vegan stereotype, it’s been an awesome journey over the past two years. I feel more connected to food’s power to energize. I understand more deeply the effects of various foods on my blood sugar. Yet, I’ll admit that no consideration was given to how it might affect my blood sugars, insulin levels, or diabetes in general. For those who know me this will come as no shock, I am firmly in the “not a planner” camp. I tend to take action and make diabetes adjustments on the fly. Does that always pan out for me? No, it does not (proof here).

So, when I jumped off the carnivore cliff and explored uncharted vegan territory, surprises were aplenty:

I eat a shit-load of carbs

250. That was yesterday’s carb total. Two years ago, if you would have told me to eat 250 carbs in a day, I would have told you that was a suicide mission, or one large pizza at 3am. It’s not as if I am actively trying to eat as many carbs as humanly possible just to prove a point that people with diabetes can consume carbs (although that might be a fun game to play with all the paleo folks). When you take away animal protein and fat, one must find a way to consume more calories. Carbs tend to be the more available macronutrient in the plant kingdom. Get it straight, I eat plenty of tofu, beans, tempeh, and lentils for protein. Those foods just happen to be packaged with carbs too. Nor am I consuming carbs in the form of cakes, cookies, soda, candy, etc. but more the route of oranges, steel cut oats, quinoa, sweet potatoes, and apples.

My insulin needs have dropped

Given the previous observation and the apparent trade in protein for carbs, most would guess higher insulin counts would be necessary. Turns out that it’s been just the opposite. These are guesstimations, but hopefully still illustrate the observation. I now eat roughly 50 grams of protein less per day and consume 50-100 grams of carbs more per day than 2 years ago. In turn, I now average roughly 34 units of total insulin per day, when two years ago I took somewhere in the 50s. This is the 14 day average from my pump. 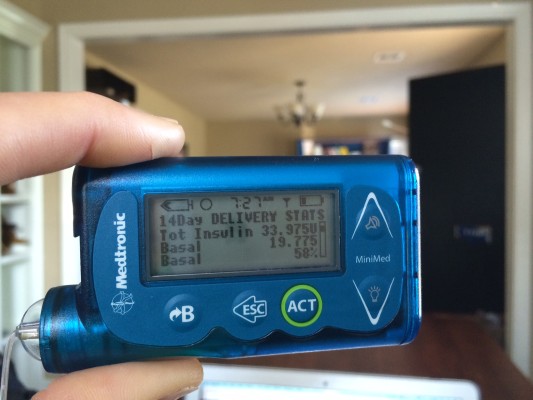 That’s a pretty dramatic drop. In my rather simplified formula for insulin needs, I equate the most weight to the following: food, exercise, and stress. My exercise has increased a bit, but not a complete lifestyle change. I am probably a little less stressed. My diet is certainly different. Cause and effect is hard to prove but it does feel like the diet has been the more pronounced factor. When asking endocrinologists at school to explain, some have said that my body is less resistant to insulin because I am eating less protein. Some have equated it to the fact that I’m eating more complex, fiber-rich carbs now. Both sound alright to me.

I now shop at Whole Foods

I almost said that I wasn’t as smug as I thought I would be, but there’s no way to make that claim in an objective way. It has been proven that I go to Whole Foods frequently–so yeah that’s probably enough evidence–because one of the guys who works there stopped me when out at a bar last weekend just to say, “I always try to say hi to the regulars when I see them outside of the store.” Two years ago I didn’t even know what Whole Foods was. This has been a rather surprising development, of which I’m not sure what the final outcome on my life will be.

6 thoughts on “The Dawn Of Vegan Diabetes Management: A Few Surprising Findings”