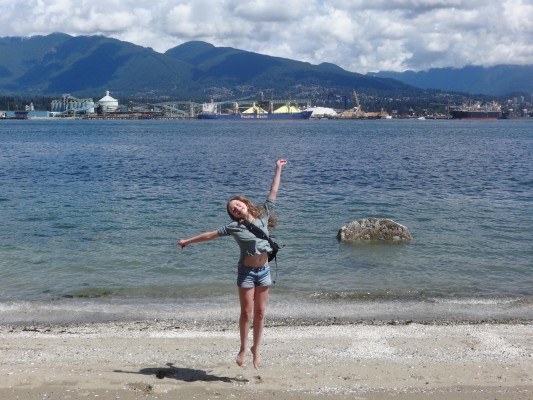 As a freshman in high school, if someone had asked me what type 1 diabetes was about two months ago, I would have been clueless. I kind of knew about Type 2 and I might’ve had a sense that there was a second type of diabetes, but… that was about it.

A few weeks before my diagnosis, I hadn’t been feeling like myself and was thirsty all of the time. My mom and I decided that should it persist throughout the next week or so, I would go to the doctor. On Thursday morning I felt fine, except for this new usual thirstiness. About mid-morning my stomach started hurting a little. It wasn’t that bad, so I figured it was just something I ate. I had biology class right before lunch, and we were doing a lab on yeast fermentation. While my teacher was explaining part of the procedure, I started feeling dizzy. It got worse and worse, and by the time I realized something was actually wrong, I couldn’t really do anything. Out.

I woke up on the floor, and it took me a while to remember what happened. I wondered if I had fallen asleep in class! My teacher said it looked like I had a seizure and led me out into the hall. He got me some water, sat me down, and called the school nurse and some other people. No one really knew what had happened, but they took me over to lunch early. I still felt a little dizzy, but after eating lunch I felt fine. Of course being the protective person she is, my mom came and picked me up as soon as she could. We went to the ER, and they thought it was just dehydration. I told the doctor I didn’t think it was dehydration because I had been drinking a ton of water every day. The doctor said there was a small chance it was T1D, but it was probably something else. Wow, diabetes? Yeah, it must be something else. I can’t have diabetes. The hospital nurses took my BG, and it was high 300s. The doctor came back and told me that yes, I had diabetes.

It was a lot to process. I had no idea how someone managed T1D and it was so overwhelming. I had been expecting to come home from the hospital for dinner, and now finishing my biology homework was the last thing on my mind. The nurse came back and told me the spiel I’d hear about a million times over the next few days: “Your pancreas doesn’t produce insulin… You’ll need to count the carbohydrates you eat from now on and take the correct amount of insulin to allow the sugar to enter your cells…” He told me I could get an insulin pump, whatever that was.

I was transferred to OU Children’s Hospital and stayed overnight. It was one of the worst nights I’ve ever had – shots in my arm every two hours, and round the clock BG readings. I didn’t fully understand what these things were or why they were happening.

The next day was education day. Luckily I hadn’t reached ketoacidosis, which the doctors told me is the point during onset when most people come into the hospital. The whole day was a blur. There were so many different doctors coming in my room, and every single one said the same spiel I had already heard- even in my second day in the hospital. Like, do you think I don’t already know I have diabetes? Yes, I know that my pancreas doesn’t produce insulin, thank you.

Fortunately, I was discharged from the hospital that evening and was able to see my friend in the school play. I wasn’t looking forward to telling my friends about my diagnosis. It wasn’t that I didn’t want to tell them- I’ve been very open- it’s just that I’ve never liked to give big news to people for some reason. I guess I wanted to avoid the awkwardness of it, but all of my friends were very supportive, and it’s gotten less and less awkward to share my story.

I was sent home with the smallest needles possible, but my injections really hurt with those needles. I asked my educator about it during my follow-up education session, and they suggested I try the larger size needles. My injections don’t hurt as badly now, even though sometimes I get bad ones. I can’t wait until I can get a pump! I’ve been researching different types on the Internet like crazy.

Unfortunately, I have to wait three months so they can get my HbA1C. (Ugh.) I am counting down the days.