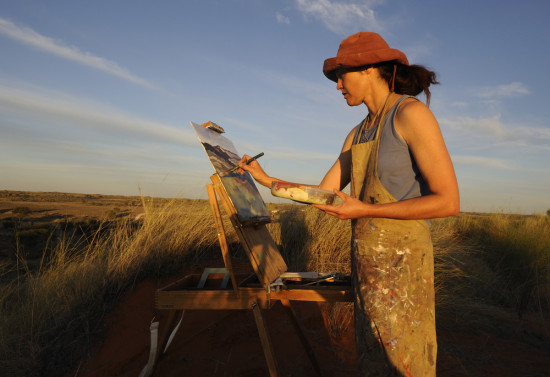 The DDG received a heartfelt message from a woman who has dominated diabetes for 60+ years.   I wept while listening because SO much of her message hit home.  She described her passion for art and successful career as an artist while battling diabetic retinopathy.  Feeling defeated by a recent trip to the eye doctor, she couldn’t enjoy a single moment of her exhibition.  Diabetes had robbed her of happiness and replaced it with a dark cloud.  Could she still be an artist if/when she lost her eyesight?

I rarely talk about it, but I was fortunate to receive vocational rehabilitation to assist me with my tuition, books, etc.  Even though I was thankful for the help, I was limited as to what I could study and art was on that list.   When I inquired, they explained should/when I go blind, I would no longer be employable.  Shattering news because it confirmed what I had feared growing up with diabetes.  I had no desire to be an artist, but the fact this damn disease could prevent me from doing so was soul crushing…. I graduated with an Environmental Geography degree instead.

Fast forward 15 years –  After a successful couple of years as a jewelry and tee shirt designer, I opened the doors to Dreamer Concepts: A Community Art Space and have been working with artists for about 10 years.  I didn’t pursue traditional art, more fine craft and created Dreamer Concepts to help emerging artists.  The recent message hit home because she is living the dream, even when major artistic/diabetic obstacles present themselves.  Take That Diabetes!!!!

As T1Ds, I believe we have a tendency to suffer in silence, but she had the courage to reach out, to express her anger and feelings of defeat.   In reaching out to her, it reminded me of a post I wrote in the first month, Do You Suffer In Silence?  I reread it and could relate to her feelings of being robbed in a time when the average person would be rejoicing.  No one knew I was suffering and I think that made it worse.  I applaud her for expressing her frustration and feel confident she will continue to thrive no matter what curveballs diabetes throws her.

I hope to hear from fellow diabetics who have broken the glass ceiling by pursuing a career that was not encouraged.  You never know who you might inspire to follow their dreams.

4 thoughts on “Tuesday Topic: Does Diabetes Limit Your Career Path?”