Over the time we’ve been dating, I’ve started to recognize when Liam gets low. He gets giggly and can’t speak and if he’s asleep, he doesn’t wake up. It’s becoming easier to catch the lows and they’re easy to deal with if we have sugar that is easily accessible. Liam always carries dextrose tablets with him so finding fast acting sugar is never a challenge. One of the scariest lows I’ve had to deal with was during our first year’s round of final exams. We were up late studying and hit a point where we couldn’t focus, so we started being silly, looking for things to do. I applied temporary tattoos I scored for Halloween onto Liam’s face as a joke. We quickly fell asleep with plans to wake up at 9am to hit the books and remove the tattoos from Liam’s face. 9am came quickly and Liam didn’t wake when the alarm buzzed. I shook him and he opened his eyes, smiled, and rolled over. This is a telltale sign he’s low, but luckily, most of the time it’s easy to force feed him juice. This time was different.

I didn’t try to wake him up again, instead I got up to grab some juice because I knew what was going on. Just then I turn around and Liam was sitting straight up in bed, eyes as big as dinner plates and he’s grasping at the bed sheets trying to stand up. His entire upper body was furiously twitching and he fell onto the floor and didn’t get up. I helped him back onto the bed and called his best friend who was thankfully at home. He advised me to call his parents and campus emergency services. The campus emergency services weren’t available so security called 911. The entire time I was waiting for 911 while on the phone with Liam’s parents, I was force feeding him dextrose tablets and juice. I kept a close eye on his blood sugar – 1.2, 2.3, 1.6, 4.0 and then back down to 2. By the time 911 arrived, his blood sugar was coming back up and he was able to speak.

This episode is just a reminder – diabetes can be terrifying and shouldn’t be taken lightly. Almost a year later, Liam and I laugh at this eventful episode. I’m sure it was a hilarious scene to walk into. I was in my Christmas pajamas, he had Halloween tattoos covering his face and was sitting there in his boxers. I’m sure the paramedics had a good lauch in the ambulance on the way back to the hospital. 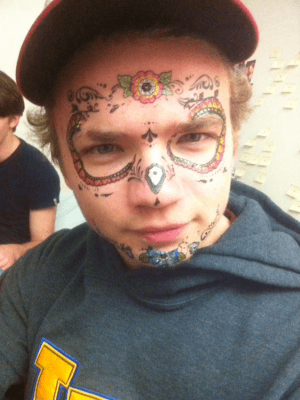 I'm Brittany and I'm studying Psychology at Trent University in Peterborough, Canada. I've been thrown into the crazy world that is type 1 diabetes because of my boyfriend Liam who was diagnosed at 8 months old. We're sharing our story to help show the lighter side of type 1 through the eyes of the significant other and have received tons of positive feedback from individuals influenced by this disease.

2 thoughts on “Turns Out This Thing Is Kinda Serious”