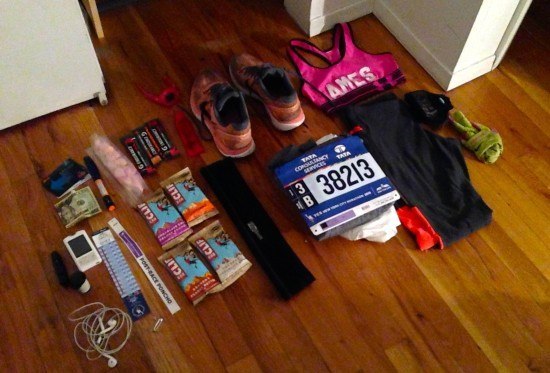 I began running when I was around 24 years old (12 years after my diagnosis with type 1 diabetes). I had always been reasonably fit, participating in sports during high school, but during my three years at university and a couple after I let my fitness slide. At the time I didn’t ponder its impact on my diabetes until I started back.

My best friend signed up for a 14km race in Sydney, Australia and got me to sign up–now I had no choice but to train. He had a head start on me, and was naturally a lot faster. I struggled to keep up in general, consistently worrying about lows during runs which would make me tired and slow me down while I scarfed down a snack. I was embarrassed when these things happened, which was pretty often at first.  I was still on injections at the time, not managing my diabetes at the best of my ability, and just getting use to exercise’s effects. Improvement was my only way forward.

After three months, I started to run on my own. Running with a faster companion, all the time, was growing old but I understood that I had to keep training because the 14K was approaching fast!

Running on my own provided an immediate, new found freedom. I could run at my own pace, my own distance, and stop and eat sugar if I had a low with no pressure to keep up with someone else. This was my first experience of enjoying running. For the next 2 years I kept at it and participated in a range of 5k, 10k and even a few half marathons. I was never fast but enjoyed it, most of the time!

It was when I changed my lifestyle and relocated to New York City two and a half years ago that my love for running really started to thrive. I ran the SF Nike Women’s Half Marathon in October 2013 and finished in 2:01….so close to under 2 hours! By then I was on the Medtronic Minimed insulin pump and that made a huge positive impact on managing my BGL during training, especially long runs.

==Is that weekend adventure calling your name? Pick up what our team uses when we hit the road, trail, or mountain.==

I started using a reduced temporary basal, limiting lows during runs and keep my sugars in relatively good range. I still had some work to do as I would always run high during races and finish anywhere between 250-300. Not a good feeling.

With consistent running and training I have improved my race times and my diabetes management in parallel with a lot of trial and error. My last half marathon (the Brooklyn half this year) I finished with a time of 1:43.

I ran my first marathon on November 1st in NYC. It was an incredible experience and I enjoyed every moment, even the last few miles of pain. I ran a 3:39 marathon, so extremely happy with my time, and so close to qualifying for Boston! My BGL control during the race was incredible – I tested my glucose levels 4 times while still running at pace and I didn’t go above 180 or below 75, which helped with such a good overall performance.

Okay, so now to the fun part. How do I manage my diabetes and keep my blood glucose levels during training and races? During training it is a lot easier to keep my levels in control as there is less adrenaline running through my body–helping me stay conscious of how my body feels and not so focused on trying to get a fast time.

On a typical 10 mile training run my schedule is as follows:
Test my bgl 20 mins before I run. If my bgl is between 80 and 150 I will eat a banana 5 mins before I run and maybe a date or two.
If my bgl is below 80 I will eat a few glucose tablets along with the banana and test my bgl again right before I head out the door.
If my bgl is above 150 I will give 0.1-0.3 units of insulin and run without eating.
I will also put my insulin pump on a 50% temp basal rate.

During any run, I will ALWAYS bring snacks with me for both refueling and in the case I have a low sugar.
I generally take 80 grams worth of glucose tablets and 1 Clif Bar.
Summary: During training runs my bgl won’t creep higher than 180 and I will generally finish my run below 100.

The tricky part is post run when your body is releasing adrenaline (the runners high is a very real thing!) and excess glycogen stores. My bgl levels can rise to 200 within 20 minutes of finishing my run on 90. To combat this I will put on an increased temp basal around 170% for 2-3 hours post run and give my usual bolus for the amount of carbs I eat to replenish my body. I don’t seem to have a pattern of delayed hypoglycemia as some people experience after intense exercise.

During longer runs when training for a marathon, I will test my bgl during runs – generally around the 13 & 18 mile mark for 20 mile runs. I also have to refuel a lot more not for my diabetes but to keep my glycogen stores up as I am burning through so many calories. I will eat 3 clif bars (40g of carbs each) during my run with no additional insulin.

For my most recent race, the NY marathon, I woke up at 4:30am to eat a breakfast of 5 bananas & some berries and took my usual bolus. On my way to Staten Island (the start of the race), my BGL was 75 so I ate a clif bar and banana and my BGL rose to 160 which was perfect for pre-race. I then ate another banana at the start line. I also had 80gms of glucose tablets and 4 clif bars and some Gatorade gels that I would carry during the marathon.

At around mile 10 was the first time I tested my BGL and it was 75 so I ate half a clif bar, some gels and a couple of glucose tablets and also suspended my pump. 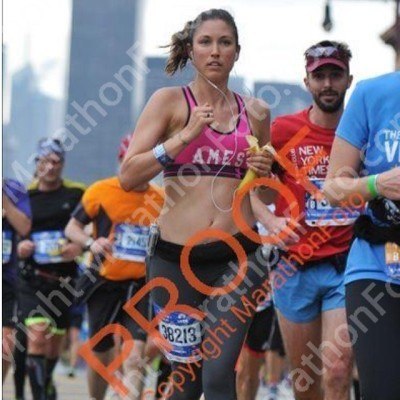 Give me a break, it cost a lot of money to buy the real picture.

I credit a lot of my performance to my good BGL control and stability throughout the race. This is one of the most important aspects of running and training with type 1 diabetes.

Before running I would take roughly 50 units of insulin a day, since switching to a high carb vegan diet and running 6 days a week (among yoga, bootcamp, spin classes and personal training) my insulin intake is between 20-25 units a day. Less than half of what I was taking before!

Next goal – maybe an ultra!

(Note: Amy was featured in Forbes right after completing the NYC Marathon!)

If you have any questions on running and type 1 don’t hesitate to email me: amymck88@gmail.com or check out my Instagram @vegamy

Amy is a 28 year old long-distance runner, living in Sydney, Australia. She has had type 1 diabetes for 16 years, currently using the Medtronic 640G insulin pump and CGM. She is training for the 2017 Boston Marathon and her first ultra marathon later this year. She recently went on an 8-month solo expedition through Central and South America with a backpack full of diabetes supplies. Amy is also a plant-based nutrition coach. IG: @amylmck

5 thoughts on “What It Takes To Finish 26.2: Temp Basals, Glucose Tabs, and Guts”